We got a visitor we got a Little Monkey 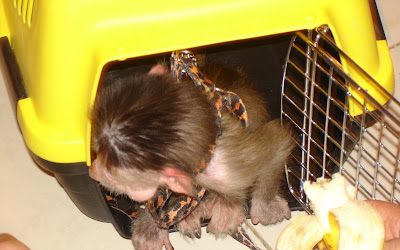 Little Monkey discovering & wondering
My sis came yesterday carrying a yellow cage with her.. I was wondering is it a dog or cat? Guess what was inside it? an adorable little Monkey!!! it was a gift for my cousin who is in deep love with animals. She purchased it through the Internet and got it released from the customs yesterday. So the Monkey stayed for two day at our house because she wanted to make some medical test/checkup to make sure that he is in a good condition. and to get him some clothes and stuff before sending him to their house.
The best part that we were trying to let him wear the diaper while making sure not to hurts his tail.. looool ..as we made a small hole to get his tail out of the diaper!! 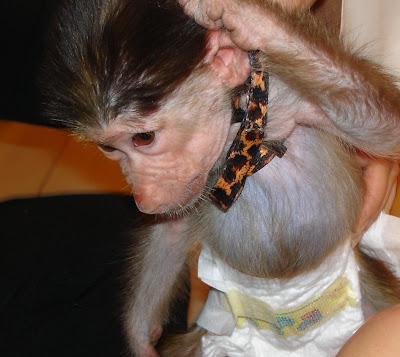 Emmm.. do I have to wear this!

Today early morning and before going to my work, I wanted to check on him, he was totally sad and scared :( I stayed playing with him for couple of minutes and while I was leaving the room he started screaming and shouting!!!! He didn't really want me to leave as he was feeling lonely! but I had no choice since I was almost late for my work. When I came back from work I found him sleeping tight holding the towel innocently! Litttle monkey you've been missed 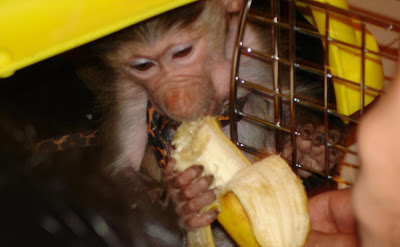 Ohh yeah Banan is my favorite