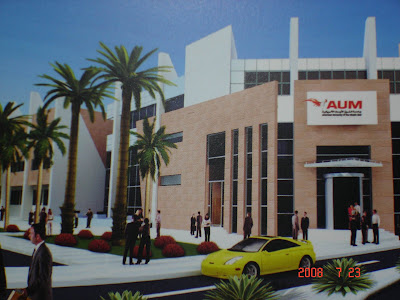 Today we had our first MBA event presented by: Chuck Johnson, Director of Master's and Executive Programs - Purdue University. The event started at 6:00 PM, Jawa Ballroom, Palms Hotel and ended at 8:30PM.
The event was so organized, AUM employee and the event organizers were very kind and really helpful, everything was just perfect. It's just that you have the feeling of comfort while you are siting there. There were 150 registered/attendance for the MBA program that will be starting in October 2008. Each 5 students are preselected and grouped in a table with their names in stands. Each person is given a red rose with a bag that contains the MBA program Handbook, T-shirt with AUM logo, files with our names engraved on the box+ pen and a CD. 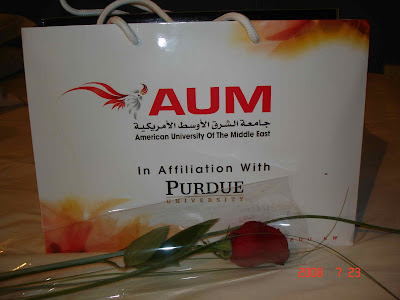 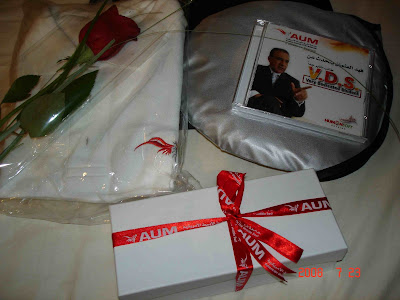 The event started with Johnson demonstrating the MBA program and answering each student questions. Fahad Al-Othman continued the speech after Johnson. He started with the Kunafa story ;) which was really exciting along with a real Kunafa given to each attendance. It was a cool event a mixture of orientation, socializing and humor. 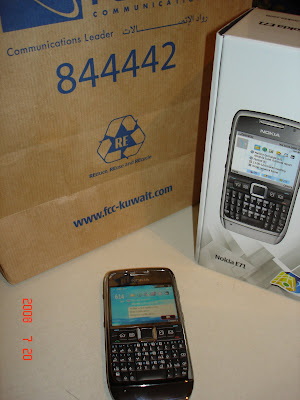 I needed a new mobile and wasn't really sure which one to choose! I was checking in the Internet for new mobiles, and checking some other blogs for people reviews. I found a post on Marks blog about the E71, and started reading through the review/comments. Most of the reviews for Nokia E71 clearly states the important functions/options that have to be in nowadays mobile . I went to FCC yesterday to check the E71. it looks pretty cool, in fact, the E71 is much smaller and thinner than what I saw in the Internet! it costs 159KD with a year and half warranty from FCC. 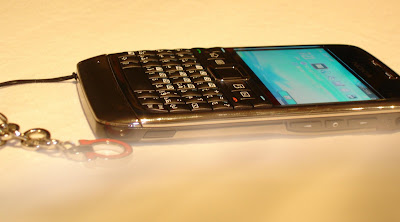 First of all, and as I mentioned the E71 looks much better in reality! much slimmer and smaller. Unlike other Nokia's series, the E71 has it full qwerty standard keyboard. You'll be using your both thumbs while typing, but the only bothering issue is the keyboard keys-> small/closed to each others, in which you may accidentally hit other letters while text messaging or blogging!

The most important thing is the battery. With WiFi and bluetooth turned on, still you have a good amount of battery savage.
The E71 comes with Micro SD 2GB memory card. it has many means of connectivity "USB, WiFi, Bluetooth, modem, infrared".

Also there is two type of notes. The normal note and the active notes, where you can add insert object to your notes such as " image, sound/video clip,file, etc.." and send it normally via MSG/MM/EM/BT or link it to a call " by adding a contact name to the note, to show your note during a call".

1- Predictive text input: This feature enable text predicting"Autocompelet word", when you start typing it completes your word with the proper matching word.
2- Switch mode button: you can choose/switch between two different screens, each containing different list depending on your needs.

Overall the E71 is an excellent phone at least the best from Nokia!

Do you believe in psychic ? Many people out there believe in Psychics! Are you one of those people? and why?
I've been reading for a while about this topic and how people get really influenced by psychics.

Let me start with some used terminology to make the picture clearer:
Telepathy: It is when having telepathic abilities such as sensing the thoughts of others and controlling their minds.
Mediumship: the supposed ability of a person (the medium) to experience or to tell others about their experiences of contact with spirits of the dead. The medium generally claims to allow communication between non-mediumistic people and spirits who may have messages to share.
Psychic : someone claiming supernatural guidance in predicting the future.
Cold reading: a technique often used by mentalists and fraudulent fortune tellers, psychics, and mediums to determine details about another person in order to convince them that the reader knows much more about a subject than he or she actually does.

Zener cards: A test or a technique used to check the psychic ability in a person, where the user of these card have to predict or guess which card was selected.

I believe that psychics have their own way to convince people on their supernatural ability, it is clear enough that god and only god who knows about the future, and no one in this whole earth could predict the things that will happen in the future, even though if it happened by coincidence it does not mean they really know it.

They can tell you things and that depends on your way of thinking, they have the ability to study your mind very well and build their reading just from the things you provide them. They ask you questions that are very important to them in order to give you the things you like to hear!

I only believe in the sixth sense in which a person have a strong feelings about something and later on he discovers that those feeling were damn true!

Do you have a sixth sense? What was your experience, and how do you feel about it? 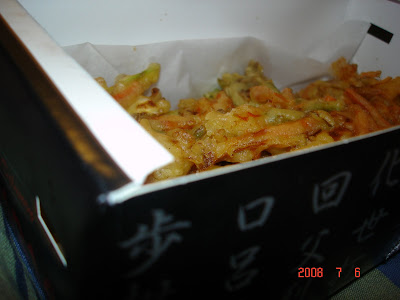