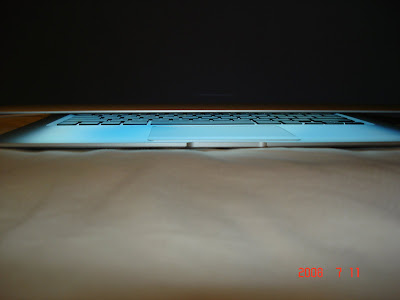 MacBook Air with its awesome look, the thinnest laptop ever, 13.3 inch wildscreen LED backlit display with 2 GB of ram, and battery life of 5 hours wireless productivity. Normally the MacBook air comes with 1.6GHz Intel core 2 Duo processor and with 1.8GHz for extra price, and storage capacity of 80GB hard drive, while you have the option to upgrade it to a 64GB solid state drive. It does not includes optical drive such as DVD or CD, instead apple has provided a new feature called the Remote Disc which permits the user to wirelesslyuse the optical drive of a Mac or PC in the surrounding area in order to have full access to an optical drive without having to drag one around. On the other hand you can simply purchase the optional external air SuperDrive that connects to your MBA with USB cable to install new softwares and play DVDs . what is more interesting for those user who don't feel comfortable while using the Mac OS, the MBA comes with the boot camp that run Windows on your Mac and start up your Mac in Windows.
I think I might get one, the price falls around 1950$ with taxes, which is approximately about 544 KD. Kuwait MacCIty wiling to sell the MBA for 670KD at the beginning of March , while Eureka have already sold the MBA for 560KD. They are out of stock now and they set a period of one week for the preorder requests for those who wana have it with the same price, I've been told that after one week from now the price will be higher to 660KD in Eureka.

Update: 10 July 2008
My Mom bought it for me and I love it ^_^
ÞöšŧëÐ þÿ Technogal ãŧ 11:38 PM
Email ThisBlogThis!Share to TwitterShare to FacebookShare to Pinterest
Ļäßëlš: Gadgets