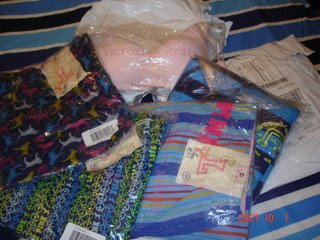 I have placed an order from Victoria Secrets, and didn't use my Aramex mail this time, one of my friends told me you shouldn't use the normal mail (home address) for some bad experiences! she told me once she added her home address when she purchase an order from Victoria Secrets, and then Kifan (the ministry of Communication) calld her to collect her order, she went there! and guess what? they opened every thing and checked her clothes labels, she didn't receive all the things for some politic reasons! they told her they have to execute some of her stuff for political issues! (I was like oh goosh Damn!) so I entered Victoria Secrets website and change my shiping address to Aramex, and sent an email to them explaning the issue in order to change my shiping address. After two days I received an email from Victoria Secrets with their responce to my request saying that some of my Items have already shiped! After one week I received one Item from Aramex which was weighing only 0.70 LB, but when Aramex deliver my order it was 4 LB !!! and I payed 7.760 Kd and that was because of the advertisement magazine! the second day I received my other 5 Items with no charges and reached to my house directly! Now my point is with the normal mailing address the delivery was much better than Aramex since I have payed nothing and since it cames directly to my house and within only one week!
ÞöšŧëÐ þÿ Technogal ãŧ 6:50 PM
Email ThisBlogThis!Share to TwitterShare to FacebookShare to Pinterest
Ļäßëlš: shipment, Shopping